Hinduism, the religion of 80% of the Indian population, has a direct impact on the social structure and in particular on the division of society into castes.
Belonging to a particular caste depends primarily on birth. Indeed, according to this criterion, the individual is positioned into a caste and a sub-caste. Over time, a kind of social 'hierarchy' has been established, characterised by specific privileges and duties. Power is of course in the hands of the "highest" castes in the hierarchy.

Castes: a pillar of Indian society

Not all castes can be found everywhere in India. Some are specific to a place or to a region. The ideology of caste is to affirm that men are fundamentally unequal and that each individual has the duty to accomplish the task attributed by virtue of his rank and his birth. If an individual is born into a caste, he cannot change it. Even today, people still prefer to marry within the same caste, or even within the same sub-caste.

Originally, there were only four main castes in India, each with sub-castes:

- The Brahmins: composed of priests, this category represents the top of the hierarchy;

- The Vaishyas: traders and craftsmen;

- The Shudras: the rest of the population. They are at the bottom of the scale; however, the category does not include the "untouchables" (or Dalits). The Shudras’ role in the Indian hierarchy is to serve the higher castes. 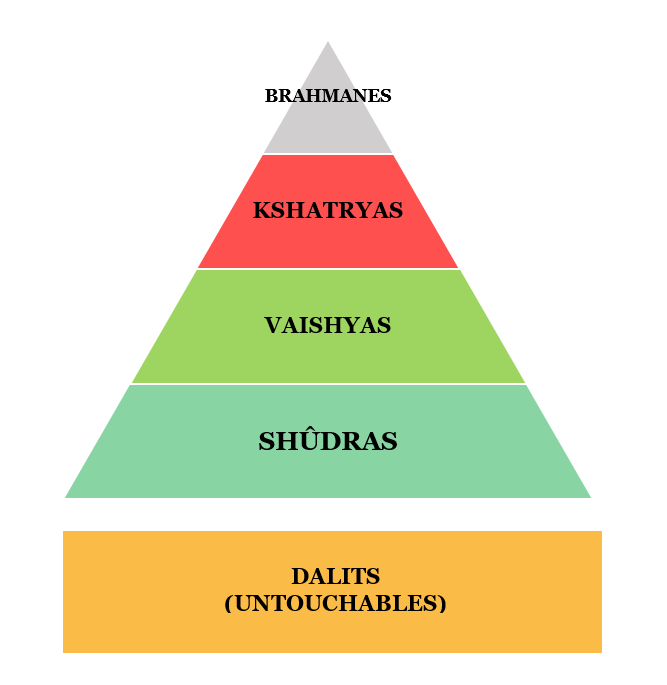 Who are the untouchables?

Also called Dalits, they are the part of the population that was not part of any caste. They descend from the tribes that lived in India before the Aryan invasion. The untouchables are excluded and made to carry out the most degrading work; humiliating tasks that no member of another caste would accept. These activities include jobs such as butchering or midwifery, which are in direct contact with blood and are therefore considered impure. Among the untouchables are also beggars, hunters, fishermen, etc.

The hierarchy of castes

Castes are interdependent. So in order to survive, each of them needs the one underneath.

The pure and the impure

It is important to know that in reality there are several sub-castes, and this is partly where the complexity of the social system in India comes from. The hierarchy of castes goes hand in hand with work and way of life. Thus the Brahmin, who is religiously and intellectually active and is a vegetarian, is purer than a person of the warrior caste, who eats meat, fights and kills, but the latter is purer than a cloth merchant, for example, since the cloth merchant is in the lower caste, and so on.

In reality, the ideology based on heredity and interdependence is no longer applied so strictly nowadays. Indeed, if one belongs to the caste of launderers, it no longer means that one will exercise the profession of launderer. You can still do a higher-quality job. Trade is not automatically determined by caste. Social mobility means that people do not always practise the trade associated with their caste, and this has completely changed the interdependence of castes, but also the hierarchy. Each caste seeks its own socio-economic ascent. Today they tend to transform themselves into ethnic groups, lobbies, political parties, even social classes, and try to make themselves heard on the political and media scene.

All these movements, which it is important to follow closely, clearly show the capacity of castes to renew and revitalise themselves while adapting to the reality of contemporary India.

Are we moving towards the end of the caste system?

The untouchables have traditionally been assigned the most degrading tasks, such as handling corpses or cleaning toilets. While the positive discrimination that will be explained later has helped to change mentalities and considerably improve the employment prospects of Dalits, much remains to be done in order to achieve real integration of these populations within Indian society. Often, the life and work of these people consists of scrubbing toilets by covering their faces - this is particularly the case for the Valmiki women, the lowest of the untouchables. The Valmiki are not allowed to show their faces, nor are they allowed to come into contact with the upper castes, let alone touch their belongings. The upper castes would never stoop to performing their tasks: each to his own role, each to his own place. Members of the lower castes live outside the village and have to make do with unsanitary water sources for drinking [1].

The word "untouchable" is therefore an indelible mark that stigmatises members of this caste throughout their lives and governs any social interaction, very often to their disadvantage. All it takes is a name, be it yours or that of your village, for your interlocutor to easily guess which caste you belong to, and to modify his or her behaviour accordingly. [2] One might wonder how, in a country that is one of the fastest-growing economies in the world, such archaic and degrading traditions can still be maintained. Caste discrimination is prohibited by the Constitution, but in rural India, where 70% of the population lives, old traditions die hard, and anyone who would seek to change the established order has their work cut out.

In the wake of independence, Article 17 (enacted in 1949) put an end to this "classification of beings according to their degree of dignity" (Louis Dumont, a French anthropologist and India specialist) [3], by abolishing untouchability "in all its forms". Also in this spirit of reform, India decided to set up a transitional policy of positive discrimination, a kind of tool for democratic readjustment [4]. It is based on a quota system aimed at establishing satisfactory representation of castes, non-castes and tribes in the legislature. In the 1980s, this measure was strengthened to promote access to employment for the "other backward castes", the lower castes that make up as much as 54 per cent of India's population. Positive discrimination, initially thought of as a transitional mechanism, has become an integral part of the administrative and political functioning of the country. For the time being, there is no question of putting an end to it, which can be seen, in a way, as proof of its ineffectiveness. For this policy has some very real flaws: it has not put an end to the perpetuation of elites, the number of individuals from the "low castes" within the executive remains, all in all, derisory, and positive discrimination has led to a form of clientelism. [5] Thus, while for some, this process has led to the emergence of a Dalit elite, the improvement in the lot of the lower castes is still largely insufficient. Moreover, this policy has had the perverse effect of reinforcing the divisions between castes, with the middle classes feeling their privileges are threatened.